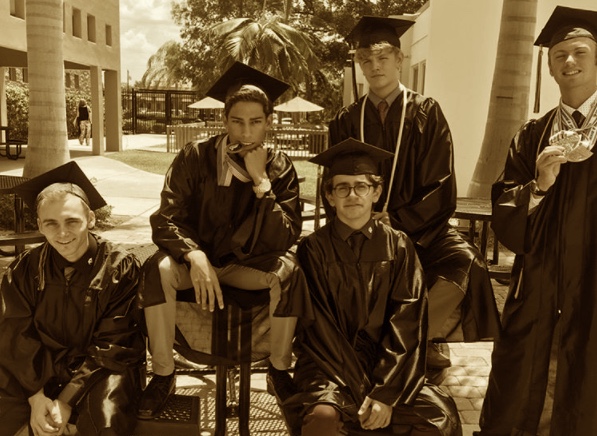 “Everyone is a genius, but if you judge a fish by its ability to climb a tree, it will live its whole life believing that it is stupid”.

My son, Ben, is such a proverbial fish – and for at least 7 years, he’s been a fish out of water.

Benjamin graduated with his high school class of 2017 this past May.  I couldn’t be more proud of him.  Yet, according to the standards of the traditional system of education, he is “average”.  Those of us closest to him observed his intellect and intrinsic desire to learn at an early age. He showed interest in computers at age 3, and, as a kindergartner, he enjoyed reading and telling stories.  By age 11, he learned Linux programming language from a library book and, as a pre-teen, he created and published animated videos on YouTube for fun.

Ben did well in school in the early years-when the AIM was on the learning, something, I’ve learned from Dr. Deming, we are all conditioned to do well in our early years.   It all changed for him when his teachers and school administrators began defining him with letter grades and class rankings.  Take this in for a moment. Think about the movie a Christmas Story. It airs on Turner Classic Movies 24×7 from Thanksgiving to New Year’s Eve.  The main character Ralphie, a poster child of mid-western 1950’s life, pours his soul into his “What I want for Christmas” theme paper – the focus of which is a Red Ryder BB gun.  His palpable excitement turns to heartbreak as his teacher returns the paper marked with a BIG, RED, “F”.   Christmas is doomed and Ralphie may never be the same.  Now realize this scene takes place, less dramatically but with no less impact, every day in a school near you.  This is our traditional system of education.

The Carrot and the Stick – how common educational practices kill our “yearning for learning “ (intrinsically motivated) at an early age.

In his seminal work “Punished by Rewards,” Alfie Kohn teaches us that carrots and sticks (extrinsic motivators) might drive students to perform in the short term, but at the peril of long-term gains in being able to think on one’s feet.  Nowhere is this more evident than in our educational system and the handing out of grades as a means of evaluating the past performance of students and using this as a prediction of the success of failure of our next generation of workers.

Dr. W. Edwards Deming, in his 14 Points for Management, eschews targets (goals) because – and I’m paraphrasing – they focus on completion (by any means), instead of through a process (which allows for continual improvement), and, in so doing, can create adversarial relationships with others striving to achieve their targets.   In a broader sense, they drive both fear of failure and lessen the emphasis on quality.

Translated to our system of education, targets and rankings cause cheating, focus on achievement, and drive in fear and suck the joy out of learning. This was certainly true for Ben.  I’m grateful that Ben didn’t completely give up on school.  When he became desensitized to the grades, he turned to gaming the system.  As I said, he’s smart and he knew exactly what he needed to do to earn a passing grade.  This is what I call survival mode. Marking time. Seven hundred and twenty days in what felt like a prison to him (4 school years).  It reminds me of the worst job I ever had. I loathed arriving in the morning and I couldn’t wait to leave.  Every minute was an eternity.   Our “fish” – the young people who don’t neatly fit into our system of education – are at risk of believing they are less than they are.

Here’s the kicker.  Rewarding the tree climbers at the expense of the fish isn’t yielding stellar outcomes for the tree climbers.  Karen Arnold, a researcher at Boston College, followed 81 high school valedictorians and salutatorians from graduation onward to see what becomes of those who lead the pack, as judged by their superior letter grades.  “Even though most are strong occupational achievers, the great majority of former high school valedictorians do not appear headed for the very top of adult achievement arenas.” In another interview, Arnold said, “Valedictorians aren’t likely to be the future’s visionaries. . . they typically settle into the system instead of shaking it up.”  Our schools teach tree climbers to climb trees – to achieve within the system.  By the same turn, why does this same system fail to teach visionaries to be visionaries?

Friends, 90% of us are average – and that is a good thing.  We have days (hopefully more often than not) when we knock it out of the park. We also have days when the best we can do is believe we gave it our best.  This is supported by our knowledge of variation – a pillar in Dr. Deming’s System of Profound Knowledge.  Separation of the tree climbers from the fish – or the high performers from everyone else – is arbitrary.  How can we, with a straight face, subject our young people – still wet behind the ears – to such judgment before they are even able to vote for a president?

If you’ve attended a graduation ceremony, you know the scene.  Pomp. Circumstance. The corralling of extended families. Pictures. More pictures. It’s all there.  As the proud (and maybe some less proud) families celebrated on this milestone day, the competition, rewards, and rankings continued.  Prior to handing out the diplomas, “special awards” were revealed. As the administrator described each award, the nominees were asked to stand and await the reading of the winner’s name.  One young lady (I will call her Grace for lack of remembering her name) was nominated for nearly every award, but received none.  Her look of disappointment – or perhaps shame – became more pronounced with each sleight.  I felt bad for her. Her special day became something less special.

When it was finally time for the graduates to receive their diplomas, the “fish” were easy to spot. Unlike their classmates who demonstrated their masterful tree-climbing skills, the fish were not adorned with awards of cords and medals.  On this “special” day – just like every other day – the tree climbers were celebrated and the fish were reminded of their average-ness or worse- their inadequacy.

I felt a pang of sadness for a moment. Then I remembered – among this school of fish are visionaries – and Ben is one of them.

(If you are interested in knowing more about how Dr. W. Edwards Deming’s work is being applied in education, refer to the work of David P. Langford, an international leader in the improvement and transformation of education through Quality Learning and Leadership.   Earlier this year, David was honored by ASQ with the Deming Medal for his 30+ year legacy of advocating the use of Deming management in education.)